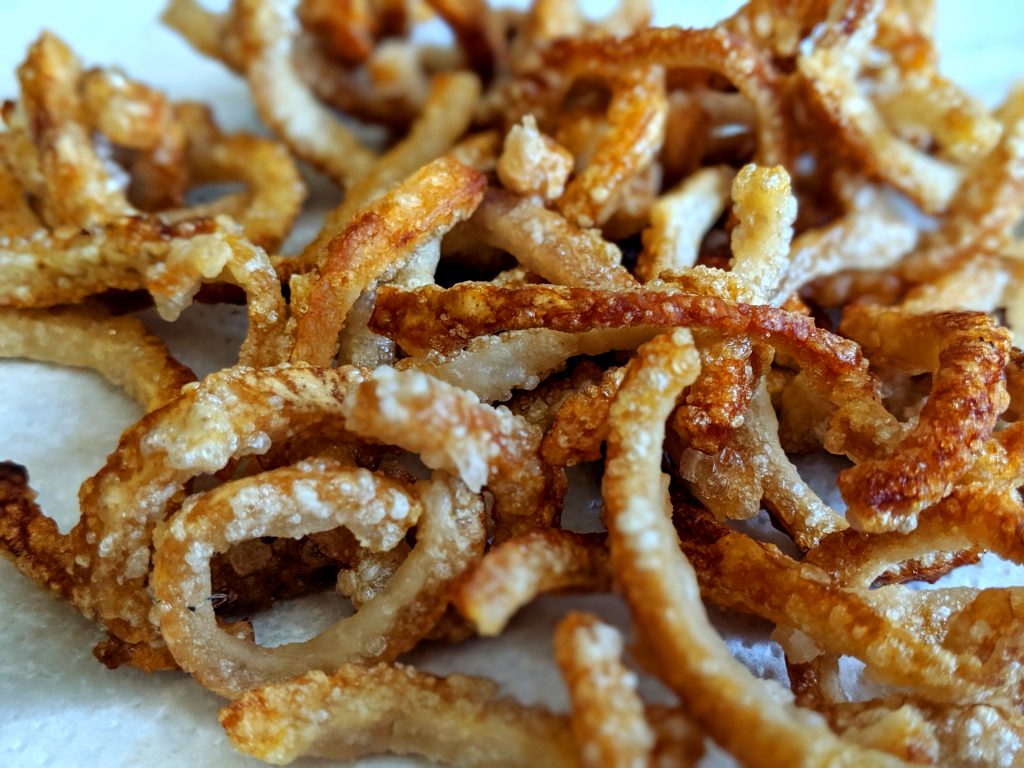 So, you are here because you are on the Keto diet or are wondering what the keto diet is about. And therefore what foods you can eat. And specifically, whether it's OK to eat Pork Scratchings on the keto diet. Yes? 🙂

So, What is the Keto Diet?

Keto Diet is short for Ketogenic Diet, this term refers to some diets which will be outlined below.

A. The Ketogenic diet is a high-fat, adequate-protein, low-carbohydrate diet that in medicine is used primarily to treat difficult-to-control (refractory) epilepsy in children.

Click here to read more information: https://en.wikipedia.org/wiki/Ketogenic_diet
As with all medical-dietary choices, you should not consult a Pork Scratchings website but consult your General Medical Practitioner first!

B. Ketogenic diets as a lifestyle choice or for weight loss should be classed as a Low-Carbohydrate diet, and should not be confused with the Ketogenic diet outlined above.
Click here to read more information: https://en.wikipedia.org/wiki/Low-carbohydrate_diet

So let's assume, that because you are here on this page, you don't have a medical condition. And you are looking for information about Low-Carbohydrate diets.

Below are a few general examples of foods that are either low in carbohydrates or high in carbohydrates. The list is not extensive, but you should be able to get the basic idea. 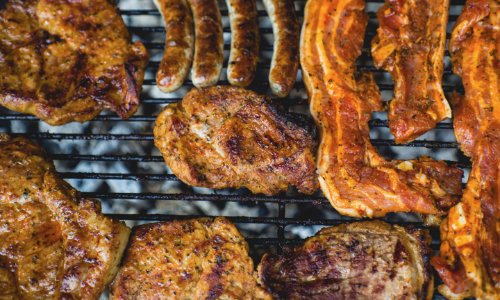 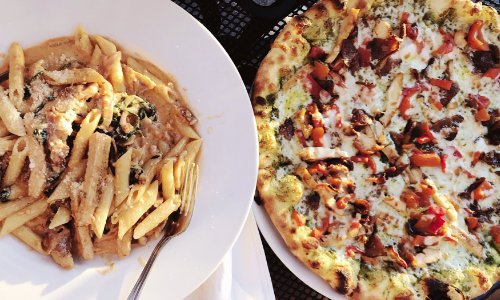 Why would anybody think that something as seemingly unhealthy as a pork scratching could ever be used in a diet? I say seemingly, because that's what some people think. After all, butter is 100% fat, and that's OK isn't it.

It does seem counter-intuitive to most sensible people, but actually, it would seem that this is the case. Pork Scratchings can be eaten as part of a low carb diet because they contain a very low percentage of carbohydrates.

Back in the days of the Atkins diet craze, all that I ever heard was people everywhere going on and on about eating fried bacon for every meal. It would seem to me that you are simply looking for foods that are low in carbohydrates, is that right? Well, not quite.

Water is low in carbohydrate, obviously you don't want to know about that. You are here, looking at a pork scratchings website! So you must bespecifically looking for low carbohydrate snacks while you are on a keto diet. Snacks being the relevant part of this statement.

Here You Go, A List of a Few Carbohydrate Amounts found in Everyday Snacks!

It looks like there could be a problem if you are looking for a low carb snack, just look at the list below, it's a nightmare!

Never fear, Scratchings are here! If you are looking for snack food that is low (or very low!) in carbohydrates, then I suggest that it's almost impossible to beat a pork skin based snack! Pork Scratchings/Crackling/Crunch are all super low in carbohydrates.

Below are some Pork Scratching/Crackling/Crunch Carbohydrate levels. Just take a quick look at these ingredient lists and nutritional information charts from a few packs I had to hand:
(the cabohydrate levels increase from left to right, top to bottom) 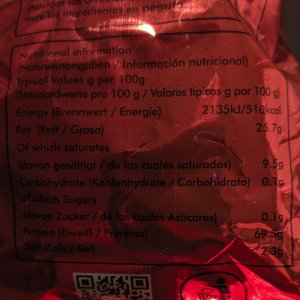 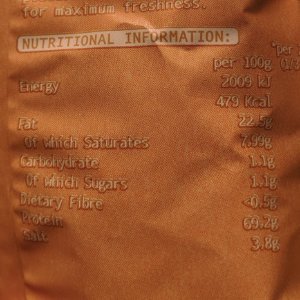 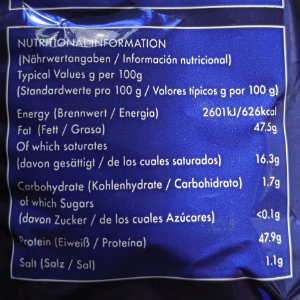 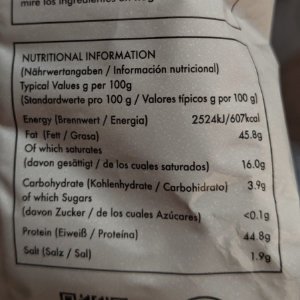 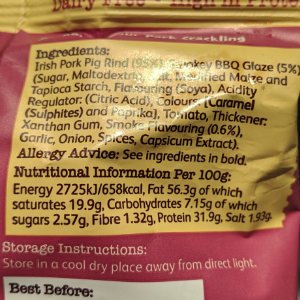 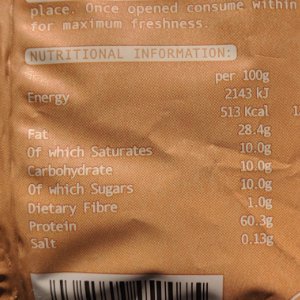 From the images above, we can see that there is a range from 0.1g to 10g of carbs per 100g. Even 10g is fairly low in carbs. The lowest carb level of the bags shown is 0.1g. This bag is an unflavoured, salted bag of pork crunch. If you want a bit of added flavour, you may have to accept a slightly higher level of carbohydrate.

We used to show a bag that had 32.66g of carbs. After speaking to the manufacturer, we found that this was a printing error! So, we have removed the offending picture and info.

Here's What Adds to the Carbohydrate Amounts?

The higher carbohydrate values were for bags that had any type of flavouring added (not just salt).

The flavourings added to scratchings of crackling don't affect the carb levels very much, this is because as a percentage, the amount of added flavour is fairly small. But with pork crunch, they are so light and fluffy, there's nothing too them. Any added flavour, as a percentage is quite high.

An unflavoured, just salted bag of pork scratchings/crackling/crunch is the way to go if you want a super low carb snack.

But What if I Like These New Fangled Flavoured Pork Snacks?

If you really really must have some added flavour, then go for a bag of scratchings, per gram there will be fewer carbohydrates than in a bag of pork cruch.

Pork Snacks to avoid on the keto diet

Salt and Vinegar flavour seems to be the most carb heavy of the bags we looked at, so avoid any salt and vinegar flavoured pork crunch.

What are the Differences between Pork Scratchings / Crackling / Crunch ?

You will see that there are a few types of pork snack available, they are similar in many ways but different too.

So, Now you should have a bit more information about pork scratchings and the keto diet / low carb diet, it's time to get some!

The first place you should look is your local supermarket, it's easy, you are probably going there in a few days anyway, just look in the snacks aisle or these days, a variety of pork snacks can also be found in the drinks aisle, hanging from those strip things. Keep your eyes peeled.

But wait, there is another way. Why not make them yourself, in the oven. It's a piece of cake. Here at Hairy Bar Snacks, we have written a simple yet extensive method outlining how to make pork scratchings in the oven at home. You don't need to be masterchef, it's simple, trust us! Click here to see our easy method of how to make pork scratchings. And if you don't want to make them in the oven, we have just created a brand new recipe: how to cook pork crackling in the frying pan!

AS MENTIONED BEFORE - THIS IS VERY IMPORTANT!

As with all medical-dietary choices, you should NOT consult a Pork Scratchings website but consult your General Medical Practitioner first.

Keto snacks – the best and the worst.
dietdoctor.com/low-carb/keto/snacks

7 Fat-Burning Keto Snacks You Can Eat at Night to Lose Weight.
thrivestrive.com/fat-burning-snacks/

Low carb vs. Keto: What is the difference between the two?
timesofindia.indiatimes.com/life-style/

What's the difference between the keto and Atkins diets?
https://www.medicalnewstoday.com/articles/326324.php

Keto Vegetables to Add to Your Diet When You're Sick of Cauliflower Rice
https://www.shape.com/healthy-eating/diet-tips/keto-vegetables

Pork Crunch/Rinds, when ground up, make the most magical stand-in for breadcrumbs!
read the full recipe here

The Keto Diet may be quite bad for you

I have recently seen a spate of articles about the adverse effects of the keto diet. SO as mentioned before, DO NOT take medical or dietary advice from a pork scratchings website. Read more, do some proper research, get information from authorative sources (not social media) and make up your own mind.

If you want to know what I think, well, I think ALL diets are crazy. If you want to loose weight, just put less into your body. Less food, less fat, less sugar, less alcohol. Eat less. Smaller portions. Don't snack. It may sound trite to say this, but I presume it took you years to put on the weight, so it may take a while to loose it. And yes, eating less includes pork scratchings.

The keto diet is the worst diet for healthy eating, according to new rankings.
Every year, US News & World Report ranks the best (and worst) diets for the year ahead. This year, the ketogenic diet was once again ranked among the worst in several categories, despite its continuing popularity.
https://www.insider.com/keto-diet-worst-diet-for-healthy-eating-2020-us-news-2020-1

Best Diets (and worst) 2020
U.S. News evaluated 35 of the most popular diets and identified the best. Find which top-rated diet is best for your health and fitness goals.
https://health.usnews.com/best-diet/best-diets-overall

A cardiologist is begging patients to avoid the high-fat keto diet because their cholesterol levels could skyrocket
https://www.insider.com/high-fat-keto-diet-should-be-avoided-cardiologist-says-2020-1 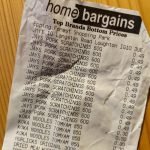 What are the Best Value Pork Scratchings? 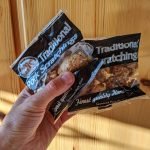 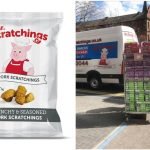 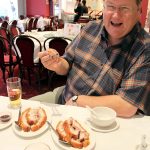 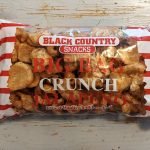 How to make Pork Scratchings

It's a piece of cake!

If you have ever wondered how to make pork scratchings at home, in the oven, successfully, then you have found the right place.

Click the image below for a multitude of reviews

When you leave, don’t come back. It’s not worth the effort 😜

Get reviews, news, recipes & other stuff delivered for free!

Sign up to the newsletter and we will send you stuff every now and then.

You won't get a load of rubbish every few days, we really can't be bothered!